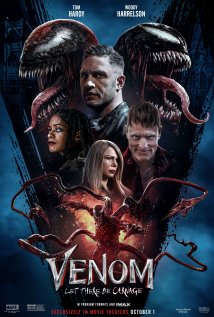 Eddie Brock attempts to reignite his career by interviewing serial killer Cletus Kasady, who becomes the host of the symbiote Carnage and escapes prison after a failed execution.

Venom: Let there be Carnage (2021) is a movie the wife and I saw last week in theatres. The movie focuses on serial killer Cletus Cassidy and his rough upbringing. When Eddie Brock is chosen to be his reporter, and Cassidy takes a bite of him, the symbiote suit on Brock breaks off and infects Cassidy creating a ruthless killer like never seen before. Can Brock and Venom stay on the same page long enough to bring him down? This movie is directed by Andy Serkis (Heavenly Sword) and stars Tom Hardy (Bronson), Woody Harrelson (Natural Born Killer), Naomi Harris (28 Days Later), Michelle Williams (Blue Valentine) and Stephen Graham (Snatch). The storyline for this is very compelling and is well written from a plot to character standpoint. The dialogue is first rate and hilarious as are the special effects, which are fantastic. The CGI fits the comics to perfection. The action scenes from beginning to end are wondeful; my one complaint, this is the darkest and most violent and gruesome Marvel comic series, and every kill and gore sequence is hidden by random things like cut away scenes or random tornados ðŸŒª to hide what are gruesome kills in the comic. The dialogue makes up for it but the lack of showing the kills keeps this from being the masterpiece it had the potential to be. This is a worthwhile sequel I would score a 7.5/10.

Fmovies: 5/10 - god awful editing/pacing and such a weak story that I'm surprised Sony okayed it, Venom: Let There Be Carnage's only highlights are the plethora of aggressive visuals and its supporting cast.

Marvel and DC these days remind me of those big players of the worldwide cheeseburger "distribution network" - the products always taste the same, because the ingredients are always accurately of the same nature and made the same way. Always. The same applies these days to those entertainment companies - you already know what to expect if a new show or movie leaves the factories of those big players of genetic movie engineering. Venom: Let There Be Carnage is not a candidate for the worst movie categories nor a total bore or fail, it is just a part of that endless and constant stream of "entertainment" these factories produce: easy to consume, easy to forget. Long gone are the times when I heard people talking about a new movie or show of those "big" players. Disappointed? No, it's just business as usual.

Venom: Let There Be Carnage fmovies. 5 out of 5 stars.

Let There be Carnage is a great superhero film which is better than the first. The story follows Cletus/Carnage (Woody Harrelson) who escapes prison along with Shrieker (Naomi Harris) and causing mayhem. Venom/ Eddie (Tom Hardy) having to stop them before they go after him.

The story is what you expect for this film. Continuing with Eddie and Venom being that bickering buddy couple. Sharing the same body. Sharing there perspectives and arguing during the situations. Even at one point they have a fight of trying to attack each other. When chaos is happening with Carnage. Who is menacing. They have to work together to stop it.

The action is awesome. Carnage escape in prison is insane. The climatic fight between Carnage and Venom is a non stop thrill ride. The visual effects are amazing. The cast ensemble is perfect. Tom Hardy great as always. Woody Harrelson and Naomi Harris are fantastic. With a shorter run time. The film does waste no time with a fast paced direction.

There is a mid credit scene that everyone will have a reaction too for a hint where Venom can go next.

I absolutely loved this sequel, I wish that it was R rated but still worth it in IMAX and with a cozy blanket. The action and humor are excellent delights throughout. Andy Serkis direction flowed perfectly with large budgeted carnage. Length is just right too has the right scenes needed nothing boring at all or otherwise. I'm impressed Tom Hardy voiced Venom, plays Eddie Brock, has a writing credit, and is a producer that's wild! Hope my thoughts are appreciated either way highly recommend this fun time experience.

Much like the protagonist in Venom: Let There Be Carnage, I feel like there were two different screenwriters battling about what this movie should be, and they didn't really communicate with each other. This sequel is a loud and frantic mess, where superpowers can do whatever the plot demands, characters don't care about consistency, and the same jokes are repeated a dozen times. If you liked the first Venom movie, you'll probably like this one. I didn't, so I don't.