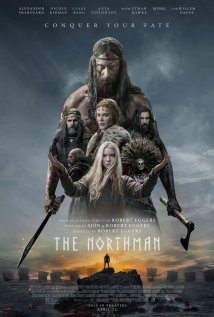 From visionary director Robert Eggers comes The Northman, an action filled epic that follows a young Viking prince on his quest to avenge his father's murder.

The Northman's combination of a large budget and epic scale with a slow burn character drama make it an incredibly unique and rare film. A disturbingly violent yet breathtakingly beautiful exploration of the cycle of violence and it's burden on those it consumes.

Alexander SkarsgÃ¥rd gives a phenomenal lead performance, full of a ridiculously intense physicality balanced with a visible pain and trauma. Anya Taylor-Joy is incredible with steely eyed determination and Claes Bang is terrific, bringing depth and nuance to a possibly one note character.

Fmovies: I had a lot of anticipation for this film since the trailer first dropped on Youtube. Many of my favorite actors are in it. The only good thing I can say about it is that it is aesthetically pretty.

But visuals are only the cherry on top if a film has a solid interesting story and good actors. This film does not have a solid story. It's just a revenge flick. Holy cow is this film a snore fest. The worst part about it was the cringeworthy dialogue. This was not a script for the A-listers. I think Arnold did a better job with Conan the Barbarian. To quote a cliche, this is more image over substance. Why couldn't they just have the actors speak in ordinary English and make a solid story?

Honestly, they couldn't pay me enough to rewatch this film.

My impression of this film is that they shot a few cool viking scenes - and decided to make a story around it and just sew it together.

Starts of pretty awkward then moves on to some cool raiding then it's back to awkward drama and weird scenes. Then it's a lot of fight talking then it's drama again. Then it's hallucinations and finally the movie ends.

Alexander is a BEAST but the movie is so poorly edited and the story is.... Predictable.

The Northman fmovies. This might be an unpopular one, but I guess I have to speak the truth as I found it - which was that I was hoping "The Northman" would be a crazy, wild and brutal Viking adventure - which in some elements it is, but it's also a lyrical, arthouse-style, loose adaptation of Amleth, that perhaps caught me in the wrong mood to truly appreciate.

King Aruvandil (Ethan Hawke) is a Viking King, who is murdered by his brother Fjolnir (Claes Bang) who takes his Estate and his Queen Gudrun (Nicole Kidman). Fjolnir fails to kill his son, Amleth (Oscar Novak/Alexander Skarsgard) though, who swears revenge as a child and after years killing and pillaging with an adopted clan, learns that Fjolnir has moved to Iceland. Infiltrating the household as a slave, Amelth joins forces with Olga (Anya Taylor-Joy) another slave in the house and his long-awaited vengeance begins.

I can see why people liked it. It's beautiful to look at, shot in practical locations and using CGI to enhance the scenes when required, such as the epic volcano that looms over Iceland throughout the film and features in the ending. The fight scenes are generally well done, though I don't necessarily think that they were as gory as I hoped, or as others seem to have found them. Skarsgard's performance was good, though if I'm honest I'm not sure that any of the rest of the cast (perhaps with the exception of Claes Bang) really fit the roles they were playing. . . These are all actors I like in other things, but personally felt like they were miscast here.

Again, I really do feel like on another day, or perhaps at home rather than at the cinema I might have enjoyed the film more, but it felt long, and I didn't care for the times when the film took its more artistic flights of fancy. The film I'd compare it too is "The Green Knight", which is similar in terms of tone and use of fantasy elements, though obviously with a different cultural mythology.

It's not often that I feel like the problem with a film I haven't enjoyed might be me, rather than the film - but "The Northman" feels like a film that's going to divide it's audience and, this time, I'm not sold.

I wanted to like this movie. I really did. Anything novel and not Marvel. But, unfortunately, this movie was dark, slow and not engaging. It started off with the harsh power of humanity to endure hardship and to impose it, but then went flat with the story. Nothing to learn, no one to love or hate, nothing to make you a character. Not intending the ultimate insult, but perhaps it is: you never forget you're watching a movie. You don't become one with it. However, it could win an Academy award for the production or costumes, but none of that makes up for a dark, slow and non-engaging story.

Three of us in an empty theater, one fell asleep. LONG and windy road to nowhere. Suppose to be a trilogy, hope not. We got bored. Would not recommend. Beautiful scenery was the only winner here.