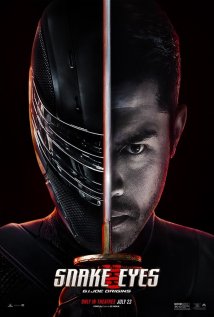 A G.I. Joe spin off centered around the character of Snake Eyes.

matbet. So this is now essentially the third attempt to bring GI Joe to the big screen. Lorenzo Di Bonaventura returns at the helm and proves once again - he does not really care... Honestly - how this film actually came to be is beyond me - a group of professional people working in the industry collectively decided that firstly : this film should be made - then that Evan Spiliotopoulos (who has hardly written a single great film to date) should write the damn thing - then add a director, Schwentke (who has a track record of terrible blockbuster films) - and let's top it off with TV travel host/Rom-com break out - Henry Golding to play Snake eyes himself. Shocking....

SO - It definitely is not the Snake eyes that people know and love. He does bad things in this film and unfortunately, Henry isn't a skilled enough actor to make you like him. I disagree that it was purely in the writing - a great actor can make you care for the most despicable characters but Golding proves here he should stick to Rom-coms...and his own accent. His physical skills and acting feel forced and awkward and in my opinion needs a lot of work if I would ever buy him as a legitimate action star. He does have some charisma and good looks though.

It seems like the majority of the articles and social media agree that the film's saving grace is Andrew Koji's Storm Shadow. He adds nuance and depth to Tommy (even though he is dealt the rough hand with having to deliver the majority of the exposition) He commands the screen whenever he is on and delivers us the most layered Storm Shadow in almost any medium to date - just too bad he is let down by an awful script. Koji steals the show with his performance and to top it off you can tell he knows how to move - his action moments were by far the most fun to watch - although he was let down by a terrible filming style there too. I definitely want to see more of Koji. Jin Sakai for Ghost of Tsushima!

The rest of the cast are great in their limited roles - Samara, Ursula, Iko and Peter Mensah - all do great. They are well cast but under utilised. Hollywood SERIOUSLY needs to stop thinking they know best with martial arts action sequences - Iko and Kenji Tanigaki's team is absolutely wasted here.

There was a lot of potential with a GI Joe reboot. There was some potential for a good Snake eyes film - but these people clearly are not the right people to do it. Paramount needs to learn. You would have thought Lorenzo etc would have learnt something since the last films 10 years ago - but clearly not. They have not only destroyed many people's favourite character - they have simple made a bad film and wasted a lot of money and talent....

Fmovies: Everything they could do wrong they did. It amazes me how can a producer see the finishing cut and be satisfied with this garbage.....full of plot holes no meaning to the entire movie.

Trust me take a nap.

At one point snake eyes goes on a magical trip in the forest to find the light. I took a magical trip to the bathroom. The add above the urinal was more interesting than this movie.

Snake Eyes fmovies. Great visuals ruined by terrible writing. Hollywood is a big place, where are all the good writers at? And why do people keep agreeing to go along with a film after reading a terrible screenplay? People need to start speaking up before the film is complete about the writing.

Saw the movie last night and was not impressed with anything I saw. The makers of this film have either no idea of the origins of Snake-Eyes or they intentionally destroyed the character. Aside from the fact that Snake-Eyes was always a Gaijin (white guy) he was also honorable in all that he did. This version has him as a two-faced, lying, thief. The feeble redemption arc in the final act was too little - too late, and unbelievable. The casting choices also left me a bit confused. Golding was never a good choice for Snake-Eyes and as much as I love Samara Weaving, she was a horrible Scarlet. The actress who ineptly portrayed the Baroness was too young for the character and was not even close to being believable. Iko Uwais was great as usual but would have been a much better Storm Shadow or even Snake-Eyes! Andrew Koji did do a good job as Storm Shadow and his was the best performance in the whole film by far.

The story was subpar, even for a genre piece, and the script could have been written by a middle-schooler. The action was decently choreographed and wasn't too over the top. It seemed like it couldn't decide whether to be gritty or cartoonish in its approach to the action, which was a letdown. There are several continuity issues as well; a brawler raised on the street with no formal training can automatically hold his own against highly trained ninjas (can you say Rey Palpatine?) or a girl who had been a devoted part of the clan for over a decade breaking sacred rules to save someone she just met?

All in all, this movie sucked!

Just another reboot/remake/rehash/whatever of an old intellectual property that tries to capitalize on the diversity of it's actors, much like the Mortal Kombat reboot released earlier this year.

We get nothing about the origins of G. I. Joe, Snake Eyes' induction into the team, or Cobra's origins. Just a generic, "gritty", MCU-styled action film that doesn't respect the source material and features characters who only look good and are charisma vacuums.

The Stephen Sommers films (which were terrible) did a better job depicting Snake Eyes as the lethal, stealthy, and charismatic mute he truly is.