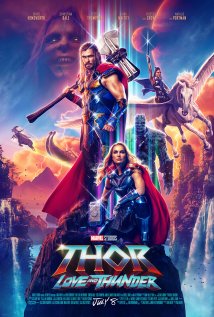 Thor enlists the help of Valkyrie, Korg and ex girlfriend Jane Foster to fight Gorr the God Butcher, who intends to make the gods extinct.

The film fails to meet the expectations of a great sequel. The Director is over reliant on unnecessary and childish humor. Christian Bale's character is underdeveloped for the most part. Zeus is a forgettable character in the movie. Thor does bring some fun to the movie but it does not help the film recover at any point. I would not rush to the Theaters for this sequel. O what a missed opportunity ðŸ‘Ž.

Fmovies: Every million Thor: Love and Thunder makes, is a million Marvel Studios and Disney has stolen, in the true meaning of the word, from fans. And believe me when I say that this farce of a movie is so vacant, that there really is nothing to spoil.

"Gorr - The God Butcher", yet not once did we see him butcher anyone, let alone a god, apart from a lousy stab. In any other franchise, such a gross disservice would have sparked outrage or contempt, but because it is the MCU, anything goes. That together with an endless barrage of bad and recycled jokes and plot issues the director couldn't have been bothered with, Thor: Love and Thunder, which is essentially named after Chris and his daughter, is a box of candy only good for causing a visual sugar high, only without the high or the sweetness. The MCU is no longer a loved franchise, it has become a worshiped one, which is why it can get away with producing thoughtless and empty products, and yet still be praised and consumed with gratitude.

This movie only served to stroke Chris Hemsworth and Taika Waititi's egos, while being a platform to showcase their children. And please don't interpret this as me "bashing" their children, they are completely innocent in this; it's their parents' egomania at fault. Thor: Love and Thunder has no substance, direction, or purpose, and is just a project of pure nepotism and ego.

This movie is half-baked, senseless, and intentionally ridiculous, which emphasizes just what a vanity venture it is.

I read somewhere someone say:

Avengers: Endgame: "Whatever it Takes".

Thor: Love and Thunder: "Whatever".

This is perhaps the most apt description of this thing that is a movie only by name.

In the sentiments of Chris Hemsworth and Taika Waititi, they suggest that this is a movie a 7-year-old would've made, and that the focus was 6-year-olds, showing how Marvel is now even flaunting its arrogance and disregard without shame.

Thor: Love and Thunder is not a movie, nor is it a movie for Marvel/MCU fans, it is a scam, a con, and footage of the Waititi and Hemsworth's family get-togethers, for them to enjoy during the holidays, but not us, together as families, and Taika and Chris are the con artists, which is about as much art as they display.

I'm not mad, disappointed, or surprised by this wreck of a movie, I'm merely aware of what the MCU is, or has become, and as an MCU fan, I'm just accepting of how the mighty have indeed fallen, at least from a quality point of view.

If you had asked me years ago if I thought I'd ever give an MCU movie such a low rating, I probably would've laughed in your face, and yet, here we are:

Ok, so maybe that is an exaggeration, but you have to search long and hard to find another moment in American film history when two mega-blockbusters of such extreme stupidity were released back to back.

Ragnarok was funny to some degree, but that was mostly due to how unexpected its gonzo humor was. (Plus, Ragnarok at least had a decent Tom Hiddleston performance before everyone got sick of him on Disney Plus). Love and Thunder just dials everything up to a degree that it just becomes swamped and strained instead. Again, it falls into the same pitfall of Ragnarok: since it's an M'C'U film it can't exclusively focus on comedy and tries to make you take it seriously at some points. (Or even worse, deals with serious topics and expects you to laugh at the same time). I feel like there is place for a stupid heavy-metal mythological space viking movie, but this is too bogged down in franchise mire to be a worthwhile one.

Oh, well. My expectations were low to begin with. Taika Waititi has essentially sold his soul to corporate Disney money-grubbers at this point and I think Jojo Rabbit may be the last unique film we see from him. (Does anybody really want to see his upcoming Star Wars film?). Add that to the fact that we entered an age of overperforming, original/innovative films (Top Gun, Elvis, EEAAO) and Thor seems more and more like a relic of a bygone past when people only cared about CGI gloop. Hopefully the times are changing, but you never know.

Thor: Love and Thunder fmovies. Movie is okay. Christian Bale is awesome, Chris still can't act, but we never liked him for his talent, rest of the cast brings what they have to the whole movie is an average Disney factory work, everyone knows their job and they execute is as they should. The story has too many silly jokes. I know Waititi's style, but now he feels like his own parody. Like those Scream parody Scary Movies.

I'm a huge marvel fanboy, and hardly ever have anything bad to say to about the MCU, but this was a huge letdown. Ragnarok is easily one of my top 5 marvel films , so was very excited to see this one, but this was really really bad. It was boring as hell and none of the jokes landed for me. First time in a marvel movie I really wanted to leave or wished it would end already. Huge waste of Gorr the god butcher. And the whole Zeus and Olympus part were so cringe worthy. I don't know how this got made. It was garbage.

Fine seems to cover it, Disney has become fine, everything is fine. It has got to the point where if spending your time aimlessly going through your phone for 2+ hours or watching a marvel movie is a bigger waste of time.