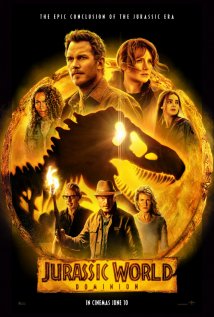 Easily my least favorite movie in the Jurassic Park saga. Absolutely horrible on ever level and a fundamental misunderstanding at what makes this saga so interesting. Trevorrow had no clue what he was doing with this movie. He was told to make the final film in a six movie saga and said to himself "Hmm let's not focus on the dinosaurs in this FINAL FILM". How do you not understand what people want to see these movies for. You need to actually focus on the dinosaurs or you are not gonna keep peoples attention and I feel that is what happened here. Instead the film focuses on giant locusts? Why is this so interesting that you need to sideline the dinosaurs for it. I didn't want to see an espionage story about kidnapping, locusts, and clones. I just want to see what the world would be like if dinosaurs took over which we don't see either. The main issue that happened in the previous film that CHANGED THE STATUS QUO is barely focused on besides a few scenes. It's baffling why they would do this. Not even the original cast can save this. Jeff Goldblum and Sam Neill seem like they are having fun but the dialogue they are given is horrendous. The dialogue in general is bad but they got it the worst. The whole cast generally doesn't seem to be trying besides Neill and Goldblum. Everyone felt very low energy and if they didn't want to be there. The villain gave the worst performance in the film. They just let that guy spitball all these awkward lines and just didn't know when to say cut. The film feels relatively low stakes as well. It doesn't feel like a finale at all but more like a bad epilogue. Fallen Kingdom feels more like a finale than this and that movie is BAD. There isn't any build up to the final dinosaur battle as well. Apparently it was set up in the prologue that they released a year ago but they decided to cut it from the movie. They decide to cut the scene that shows the conflict between different species of dinosaur. Yeah great job guys. It doesn't help that this film is mindlessly boring as well and it doesn't deserve its 2 and a half hour runtime. This is a train wreck of a film that you shouldn't watch even if you like the original film. It's a waste of your money.

Fmovies: I don't know whether this is a fabled memory, but a few years ago I think I read an interview where director Colin Trevorrow said that the story of Dominion was always his ultimate go-to, that Jurassic World and Fallen Kingdom were the stepping stones to there (almost as if it was gathering the right build-up with characters, fan anticipation, budget, and technological advances). For every reason imaginable, I believed him. Where Fallen Kingdom ended, you had endless opportunity to explore the world with dinosaurs running amok and causing mayhem. Final shots of Fallen Kingdom included the T-Rex at a zoo, the Mosasaurus attacking surfers, a velociraptor overlooking a suburban California, and pterodactyls towering above a tourist-populated Las Vegas. It was all there; think The Lost World's San Diego epilogue but on a grander scale with more dinosaurs. Throw in the military, philosophical conversations regarding their eradication versus their survival, advance some more characters, and you have a bona fide fun summer blockbuster.

No matter what my actual opinion is of the film hereon out, I can't help but be letdown with disappointment that Trevorrow either deluded himself into believing this was the kind of conclusion that fans yearned for ala War for the Planet of the Apes (which has a much more compelling protagonist that makes it work despite its story misdirection) or J. A. Bayona pulled a Rian Johnson and put him in a corner with the concluding chapter that he had to rectify and had no actual written plan of his own. And it's not that there isn't a medium where this story doesn't work just fine. I can imagine the main plot elements being adapted from, say, a novelization or a comic series. Hell, there was even that Battle at Big Rock short that was done which could have told these elements on their own, or at the very least introduced them. Instead, they threw in extremely disjointed story bits for this final chapter that seemed to have no source of origin. They felt like they were the contrivance meant to unite our two character groups, and nothing more.

Dominion starts off very okay. It shows that it can slow down, have a genuine heartbeat, provide pathos for the existence of our reptilian brethren, trot the globe to see how they have integrated (or not) with our species, and reintroduce characters new and old (with possible internal conflicts) to show how they would pave their globetrotting paths. They even fix some of the poorly written aspects of Fallen Kingdom such as maturing Franklin's character, giving better use to the laser-targeting attack system, and giving Maisie a more believable backstory. All of this is supported with fantastic animatronic work and much improved CGI blending with it. I thought the visuals were mostly a knockout and supported the onscreen setups.

Not only that, but Sam Neill, Laura Dern, and Jeff Goldblum kindled a similar flame to their interactions in JP1 and you sat forward to watch those moments. I caught myself smiling quite a few times during those exchanges. Jeff Goldblum was especially used well as he was able to inject entertainment and comedy through his dialogue where the film otherwise was flat with on its attempts. They were not small cameo appearances and served crucial roles to the film. You buy where they are in their lives, and even though TLW and JP3 are retconned the actors clearly tapped into those experiences for their performances to accentuate their statuses.

Speaking of buy-in, I

I'm going to make this short...Jurassic World: Dominion is like cleaning out your refrigerator and dumping a bunch of stuff in the trash. Only in this case, they decided to dump the "stuff" on the screen in this film. Jurassic World: Dominion has a lot of story arcs with no real connection or depth. People are popping in, popping back out, then popping in again, boring us with trite laughable dialogue and no real character development; you don't really care about any of these people. Just when you think there might be something to a scene with the familar charcaters, CUT TO another scene with no set-up. This film is like watching a 3:00 AM B-movie that is so bad, it does its job by putting you back to sleep. And let's talk about the dinosaurs, velociraptors and various man-eating prehistoric creatures...nah, it's not worth it because other than the penultimate scene where the biggest and baddest were going at each other, they were simply an after-thought. Go figure.

Everyone connected to this film tried to do too much and it didn't work as far as the storytelling is concerned. As I said before, they emptied the refrigerator and threw in everything in this film and it left a bad taste in my mouth because there was just too much "stuff."

Jurassic World Dominion fmovies. This movie attempts to exploit the nostalgia of the original characters and it fails miserably at every level. The action, the editing, the direction, it's all terrible. The movie has no focus, too many characters that have nothing to do and nothing to do with each other. The only positive thing I can say about this movie is they did use plenty of "real" props for some of the dinosaurs, so it's not like the actors are always looking at a green screen. However, everyone just feels kind of disconnected from the movie. Like everyone involved knew the script was trash and the movie would just be a cash grab because they knew idiots like myself would go and see it. Oh well. Just Hollywood doing what they do best.

When I go to a Jurassic Park movie, I want something above all else-hyper realistic dinosaurs in cool environments, seeing them frolic in natural habitat, defend territory, battle other dinos for dominance, hunt humans, and the like. From the opening island scene with the brachiosaurus to the T-Rex reveal in the rainstorm, dinosaurs were front and center in the original Jurassic Park, inspiring a sense of grandeur and awe. The dinosaurs were what mattered, and everything else was peripheral-even the plot to get off the island. We all wanted another glimpse of the T-Rex, or were anxious to discover where the raptors were lurking.

So that was the first one. Now in this sixth installment, not only are dinosaurs relegated to a commercialized product that's seen on every tv screen in the movie, but they're demoted below the humans, genetics, and even mutated locusts in terms of importance. In a two and a half hour movie, one would expect dinosaurs to fill almost half that time, and yet they pale in screen time comparison to all the human characters. Instead, the director tried to insert cameos of the legacy characters in forced interactions and honestly cringey dialogue, shifting the focus away from the real meaning in the Jurassic Park franchise-awe for dinosaurs. The wonder is now gone.

I have given it six stars in respect for the franchise and the limited appearances of some of my favorite dinosaurs, but I'm sad to see that the director forgot what made Jurassic Park so special in the first place.

Before I went to this film (because my Grandson is nuts about this series of films) I read one newspaper review. It wasn't glowing, but it was positive. Unfortunately, this is a mess. Others have already talked about the issues I have. Granted, this is an empty headed summer movie, it could still have been done with some serious thought. I was hanging in there throughout with a new dinosaur attack every three minutes, and velociraptors going at fifty miles per hour and not getting tired. Humans being assaulted time after time and yet showing no fatigue. I also didn't see a scratch on any of them. But the best of all was the promise made to a baby dinosaur and his mother that precluded saving the world from famine. Not to mentioned the coincidences of everyone showing up in just the right places. I still don't understand how they got into that facility so easily. The return of the original cast was not helpful other than Jeff Goldblum's sarcasm. Anyway, it's all been said. This is a poor movie.